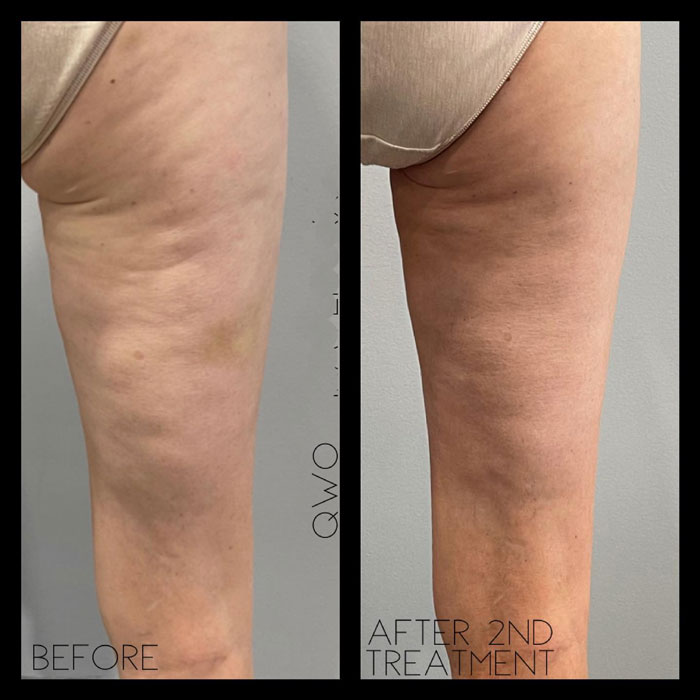 QWO
30-40 min (treatment time 10-15 min)
Temporary bruising, soreness, and temporary nodules are all common side effects
3 treatments, 21 days apart
Can treat up to 12 injections on each buttock or thighs

Even the most flattering swimsuit can’t hide cellulite, that dreaded area of dimpled skin most every woman can point to on her bottom and thighs.

Lots of home remedies promise results, but none really deliver because they don’t target the root cause of the problem — the architecture of fat, experts say.

Cellulite is one of the most misunderstood phenomena in cosmetics among both among patients and physicians, said Dr. Mathew Avram, director of dermatologic surgery at Massachusetts General Hospital in Boston and head of its Dermatology Laser & Cosmetic Center.

“People think it has something to do with them not exercising well or being overweight, when in fact it’s an architectural phenomenon,” Avram told TODAY.

“It bothers patients tremendously, they’re very interested in treatment, but they’re also very wary of kind of snake oil solutions that that haven’t helped them in the past.”

Now a new option, Qwo — the first injectable treatment for cellulite in the buttocks approved by the U.S. Food and Drug Administration — is becoming available in doctors’ offices. Avram has been among physicians taking part in an early launch over the past few weeks.

Qwo is made of enzymes that target the structural causes of cellulite under the skin. Here’s what prospective patients need to know:

It’s estimated up to 90% of adult women have cellulite, typically on the abdomen, buttocks and thighs, according to the American Board of Cosmetic Surgery. It’s rare in men, Avram said.

As women go through puberty, there are hormonally-based changes in the way their fat is organized, he noted. Fibrous bands that anchor the skin to the muscle, called septae, pin down fat tissue, resulting in the dimpled “cottage cheese” look.

How does the new treatment work?

The injected enzymes are thought to break and release those fibrous strands, redistributing fat cells. “It goes from kind of the dimpling to a smoother surface of the skin,” Avram said.

Before the treatment begins, the patient stands so that the doctor can circle any dimples that should be treated. The patient then lies down and Qwo is injected into those spots. Each buttock can receive up to 12 injections during a session, which takes about 15 minutes.

A total of three visits, at least 21 days apart, may be needed to get the best results. The number of treatments depends on the amount of improvement a doctor is seeing and the amount improvement the patient desires, Avram noted.